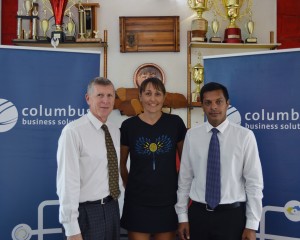 Bridgetown, Barbados (September 16th, 2014): Columbus Business Solutions (CBS), the business arm of Columbus Telecommunications Barbados Limited, is bringing squash in Barbados into the age of technology and all its possibilities. The Barbados Squash Club recently signed on with CBS to have the entire Club Wi-Fi-enabled so that all patrons and players alike can have access to FREE super-fast internet.

Club President, Paul McLeod expressed his gratitude to members of the CBS team, at a recent presentation, where he said that “As a sports club, ran by volunteers, having suppliers that can be relied upon, is cherished. So, when the Barbados Squash Club was searching for an internet provider, not only did CBS have the business solution, they also delivered. Within 24 hours of deciding to go with CBS, the club was connected and able to stream video of live matches.”
He boasted that “Recently, the Caribbean Squash Championships were played at the Club, during which, people from around the Caribbean, and around the world were able to watch live squash, all eight days of the tournament from Barbados, all thanks to CBS.”

Vice President of CBS, Jaggernauth Dass said “CBS was proud to partner with the Squash Club given its positive influence on fitness and health which equates to a healthier community and a healthier Barbados. Squash and CBS are a natural synergy given that squash is a fast-moving high-impact sport and CBS delivers fast and reliable hi-tech business class solutions.”
CBS officially launched in June of this year offering new age connectivity and IT solutions, to meet the needs of any business in Barbados.

Dass added that “Technology is advancing at an astounding rate and businesses and sporting facilities alike must be equipped with the tools to support business functions and enhance customer experiences. We live in an age where service providers must either adapt or perish”.

The Barbados Squash Club is equipped with three international squash courts, a lounge area and a small gym. This month during the week of the 22nd to the 25th, the Club will be hosting “Women’s Squash Week”. To find out more about the Squash club and Women’s Squash Week you can visit http://squashbarbados.org.

KEEP YOUR BUSINESS
ON WHERE YOU ARE!
Please, fill out the form below and we will get back shortly.

Here are the solutions you selected
Add more solutions